As erythropoiesis progresses, cells proliferate and differentiate into several intermediate erythroid progenitor and precursor cells, which then mature and concurrently decrease in proliferative activity.1 Late-stage maturation of red blood cells is an important step of erythropoiesis as it generates functional erythrocytes; a defect at this stage, referred to as an erythroid maturation defect (EMD), impairs late-stage erythroid maturation. This results in the reduced production of functional erythrocytes and contributes to ineffective erythropoiesis, the underlying mechanism implicated in the pathogenesis of chronic anaemia in certain haematological diseases.2-4 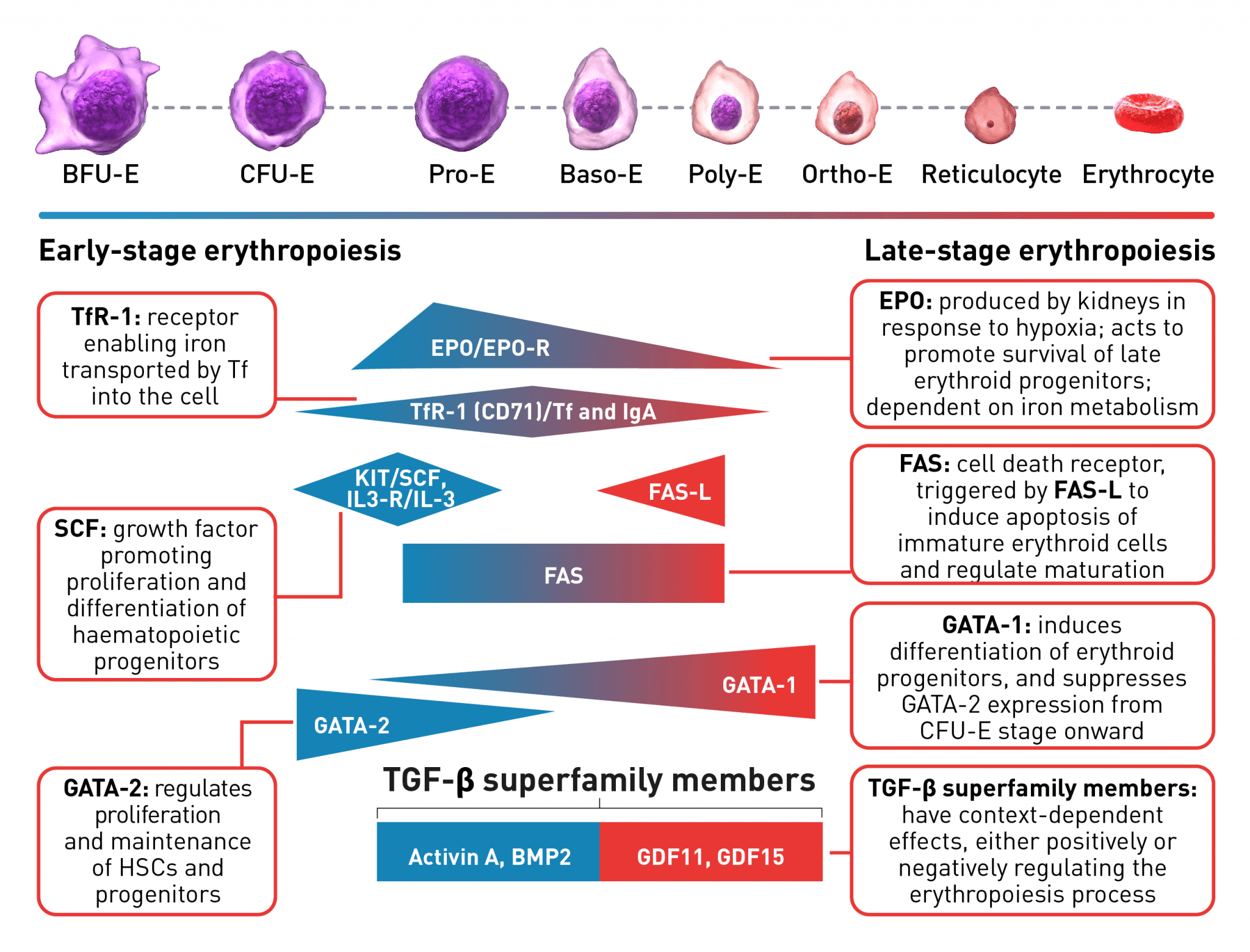 The erythroid progenitor cell compartment contains the early erythroid progenitors. BFU-E represent the earliest progenitors committed exclusively to erythroid maturation, which differentiate into late CFU-E and Pro-E.1 The earliest recognisable erythroid cells are the Pro-E, which undergo morphological changes such as reduction in cell size, protein production including haemoglobin, and reduction in proliferative capacity evolving through the erythroblast stages, Baso-E, Poly-E and Ortho-E, successively.5 At the end of the terminal maturation, erythroblasts expel their nuclei and lose all their organelles resulting in mature enucleated cells, called reticulocytes.5 After expelling its nucleus, the reticulocyte is released into the bloodstream where maturation continues in order to produce fully functional, biconcave erythrocytes within 1–2 days.5 A complex network of transcription factors and epigenetic regulators ensure appropriate numbers of red blood cells are produced.1,6-9 EPO promotes survival and proliferation of erythroid precursor cells by preventing apoptosis.10 GATA-1 is the main regulator of lineage-commitment, differentiation and survival of early-stage erythroid cells.1,7 Other transcription factors include regulators of iron metabolism, such as TfR1 and early acting hematopoietic growth factors such as SCF.1,6 FAS-L is expressed by late-stage erythroid cells to trigger apoptosis and maturation arrest, while selected TGF-β superfamily ligands play a key role in suppressing late-stage erythroid maturation.1,8,9,11 Tight regulation of erythropoiesis is crucial to ensure a steady-state process.1

Earlier stages of erythropoiesis are primarily regulated by EPO that acts by binding to its receptor (EPO-R). EPO-R is expressed at the highest level in erythroid progenitor cells, to facilitate cell survival, and declines in erythroid precursor cells, reflecting the declining influence of EPO in late-stage erythropoiesis.15

EPO and EPO-R regulation are dependent on the interaction between the death receptor FAS and its ligand, FAS-L. Late erythroid precursor cells express FAS-L that may interact with early erythroid precursors that express FAS, resulting in apoptosis and maturation arrest.1 Both proteins are found to be downregulated in basophilic cells and pro-erythroblasts found in the bone marrow or spleen of β-thalassaemic mice compared with control mice, which could contribute to the observed ineffective erythropoiesis.16

The transforming growth factor β (TGF-β) superfamily includes more than 30 cytokine ligands, such as growth differentiation factors, bone morphogenetic proteins and activins.11,17 TGF-β signalling is mediated by a regulatory circuit of activating and inhibitory Smad proteins that are important physiological regulators of haematopoiesis. Under normal conditions, Smad proteins can exert opposing effects on erythropoiesis by either positively or negatively regulating gene expression. However, under certain pathological conditions, Smad signalling can become dysregulated and contribute to EMD.18-20 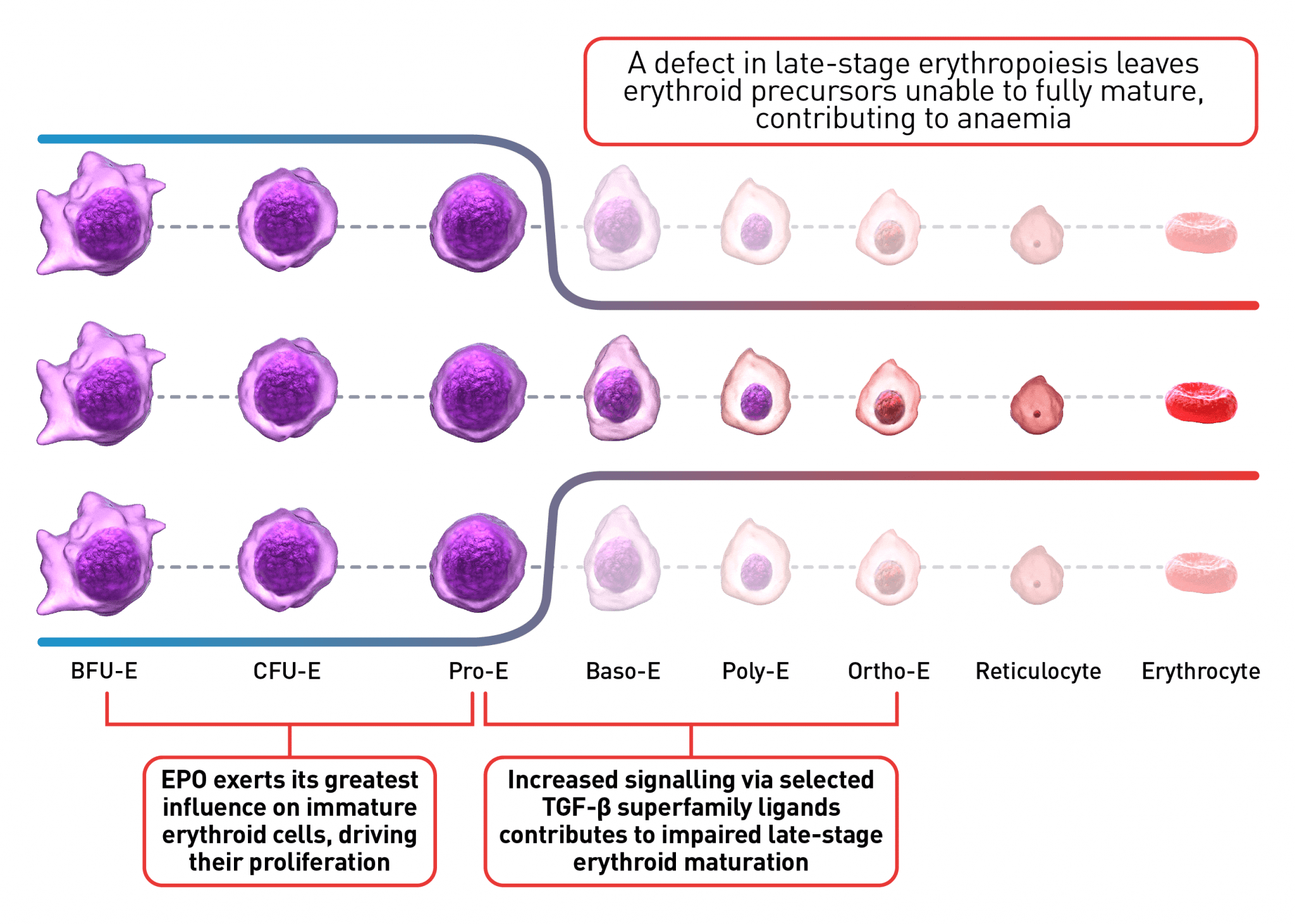 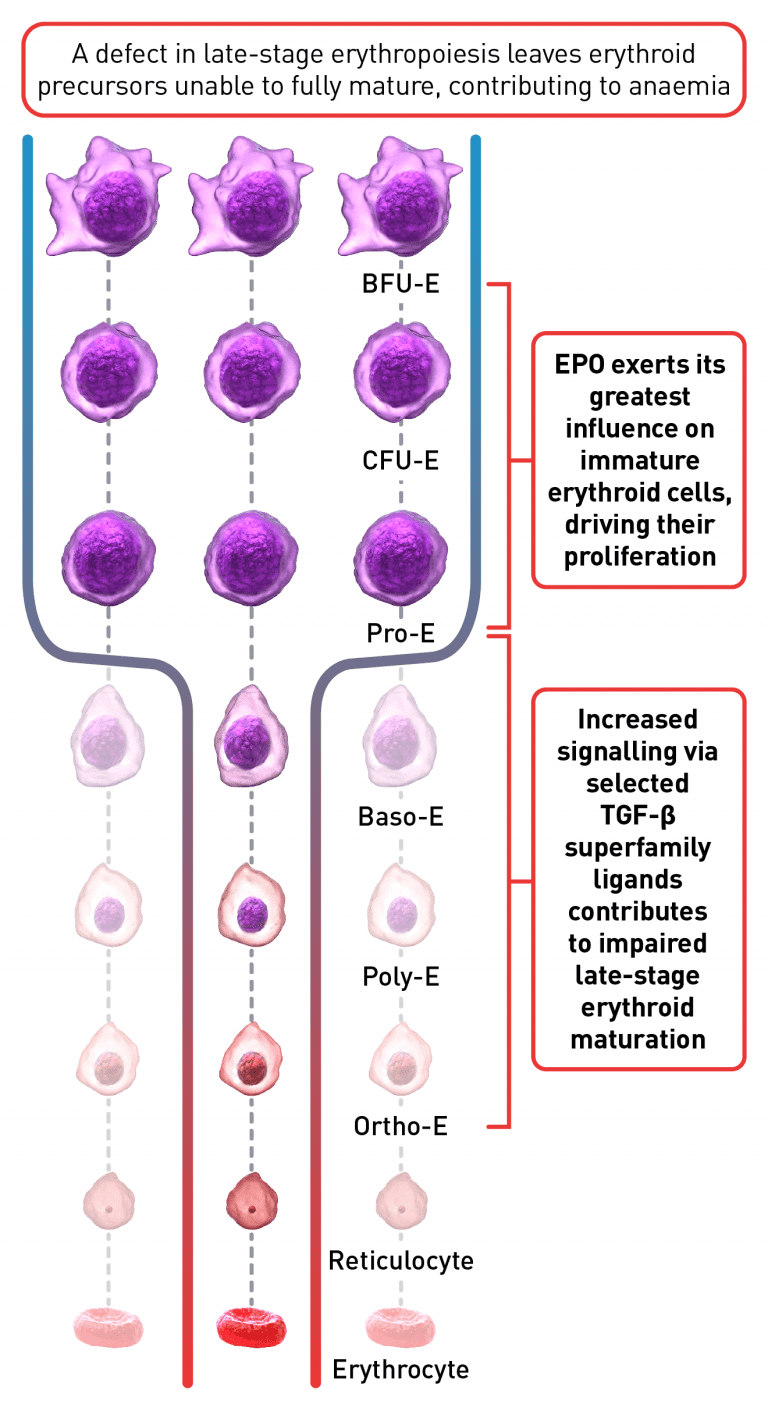 For example, low concentrations of HSP70 and GATA-1, that act to induce erythroid differentiation and maturation, have been observed in the nucleus of erythroblasts derived from patients with β-thalassaemia and myelodysplastic syndromes (MDS), while HSP70 is mainly localised in the cytoplasm and does not accumulate in the nucleus. EPO has a major role in this pathway by regulating the cellular localisation of HSP70. Free GATA-1, unprotected by HSP70, is prone to cleavage in the nucleus and, therefore, erythroid differentiation and maturation is reduced, contributing to ineffective erythropoiesis.12,13,23

Furthermore, dysregulation of the signalling mediated by selected members of the TGF-β superfamily may result in EMD in haematological diseases characterised by ineffective erythropoiesis.11,18 Levels of certain TGF-β superfamily members have been shown to be elevated in patients with sickle cell disease, including sickle cell anaemia.23,24 In bone marrow samples from patients with MDS, altered TGF-β superfamily signalling, mediated by overactivation of Smad pathway, has been shown to contribute to ineffective erythropoiesis and the resulting chronic anaemia.25 Overactivation of the same signalling pathway has also been found in mouse models of MDS and β-thalassaemia.18

Research into the molecular mechanisms of ineffective erythropoiesis revealed that EMD is implicated in the pathogenesis of anaemia in certain haematological disorders. Targeting the dysregulated pathways that contribute to EMD and impaired erythroid maturation may provide a new therapeutic strategy to alleviate chronic anaemia in haematological diseases associated with ineffective erythropoiesis.20